Named for the diamond shaped markings and grooves on the scutes (plates) of their carapaces (top shells), diamondback terrapins are believed to be the only turtle in the world that lives exclusively in brackish water habitats such as coastal salt marshes, tidal creeks, estuaries, bays and coves. Their feet are strongly webbed, with the hind feet especially large and flat. These feet, combined with muscular legs, equip terrapins to be strong swimmers. Males are smaller than females, weighing on average .5 pound to a female's 1.5 pounds. Female terrapins range from 6 to 9 inches in length while the smaller male will top out at 5.5 inches.

Consuming fish, snails, worms, clams, crabs and marsh plants, diamondbacks are found along the Atlantic Coast of the eastern United States from Massachusetts to Florida and then west along the gulf coast to Texas. During winter, most terrapins hibernate by burrowing into the mud of marshes. 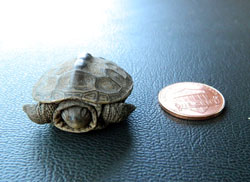 Females are sexually mature at around seven years and prefer sandy borders of coastal salt marshes or sand dunes for nesting sites. Nesting season runs from June to July, where, after digging cavities 4 to 8 inches deep, the female will lay between 4 to 18 eggs, which will hatch in about 9 to 15 weeks. Gender in offspring is determined by temperature. Lower nest temperatures will produce more males while higher temperatures produce more females. Only about 1 to 3% of the eggs actually producing a hatchling. The percentage for hatchlings surviving to adulthood is equally low. Females in NYS have been documented laying two clutches in a season, thereby increasing their odds of producing viable offspring. Once a hatchling makes it to adulthood it can live from 25 to 40 years. 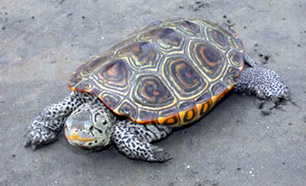 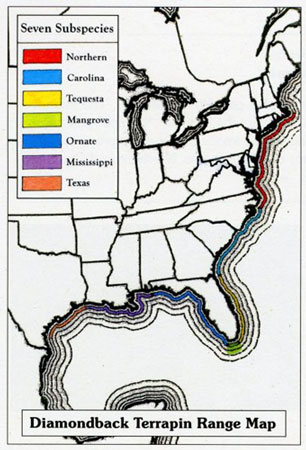 In the early 1900s, diamondbacks were a popular gourmet food. Unfortunately, as is often the case, their numbers declined due to unregulated harvesting. As the terrapins declined, thankfully so did the market for their meat, allowing their numbers 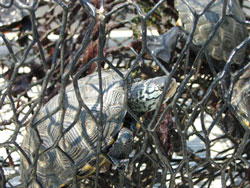 to rebound. Today's terrapins are most threatened by habitat destruction, boat strikes, road mortalities of nesting females, and nest predation. In addition, climate change is of concern which could skew the sex ratios of offspring. Rising waters will also bring about a salt water incursion into brackish tidal marshes, possibly making their habitat saltier than they are able to tolerate.

One of the major threats to terrapins is drowning in crab pots. Terrapins are attracted to the bait which is used to lure crabs. Once trapped in the submerged crab pot of in commercial fishing gear, terrapins will drown. Almost all crab pot deaths could be avoided by equipping these traps with Turtle Excluder Devices (TED's) or Bycatch Reduction Devices (BRD's).

A Coalition of individuals and organizations on Long Island support an amendment to the NYSDEC's crab regulations that mandates crab pots placed in certain coastal embayments in New York State waters be equipped with TED's/BRD's, the dimensions of which shall be no larger than 1 and 3/4 inches high by 5 inches wide (approximately 4.5 centimeters high and 12 centimeters wide). Use of TED's can significantly reduce terrapin deaths from drowning and thereby meaningfully address the leading cause of terrapin mortality. One study documented a 79% reduction in fatalities from their use while another found an 82% reduction. Some studies have documented an increase in crab harvest. Huntington-Oyster Bay Audubon was an early supporter of this amendment and is an active member of this group of dedicated individuals and organizations.

Because compliance and enforcement is an issue, in August 2015 the board voted to donate $1,000 to a fund which will offer financial assistance to crabbers to help defray the costs of purchasing TED's. This will help ensure that crabbers comply with the regulations, thus reducing terrapin mortality in our waters. 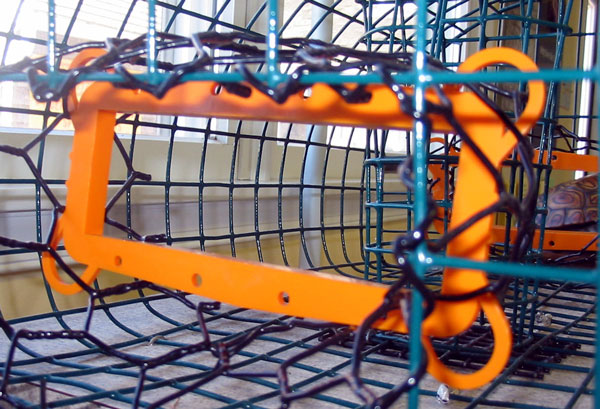