Don’t Let Your Cat Be a Killer!

Huntington-Oyster Bay Audubon works to protect birds and other wildlife, and the habitats upon which they depend through education, public advocacy and conservation action.

Why You Should Keep Your Cat Indoors:

For the health and happiness of your cat, for the benefit of wild animals, and for your peace of mind, please keep your cat indoors.

And remember...if you are no longer able to care for your cat, do NOT release him outside. Chances are, he will wind up dead. Please take him to your local shelter. Don't abandon your cat!

The Impact of Cats on Wildlife:

Many bird populations are in a serious and steep decline due to three major causes: habitat destruction, window bird collisions and cat predation. When you add up these losses, the math is chilling. Hundreds of millions of birds are killed by cats each year, and between 100 million and a billion die from window collisions. Factor in habitat loss and you are now looking at an unsustainable loss of these species.

Cats also kill prey animals such as mice, chipmunks, squirrels, rabbits and other small mammals, competing with native species such as hawks, owls, foxes and other larger wild predators that depend on these animals for their survival. Statistics show that the combined numbers of birds and small mammals killed each year by cats is close to one billion. Allowing a well fed house cat to compete for wild food sources places native predators at a disadvantage. Bottom line, cats are an invasive and alien species and do not belong in our ecosystem. 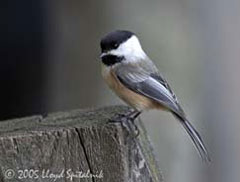 Black capped chickadee
This cheerful bird is a popular and frequent visitor to backyard feeders, making it vulnerable to cats. 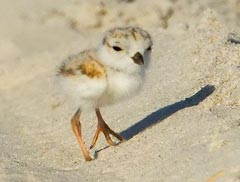 Piping plover chick
The piping plover is a Federally Threatened Species and frequently preyed upon by cats.

Tips for transitioning your outdoor cat to an indoor cat